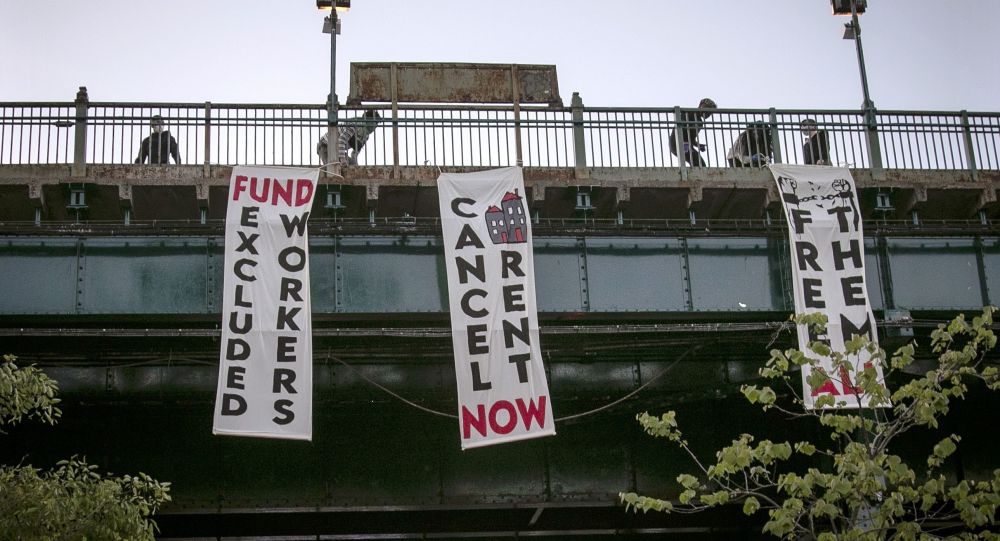 As many as 40 million Americans are under threat of losing their homes due to the economic crisis brought on by the coronavirus pandemic, with tens of millions of people unsure where they will get the money to pay for rent after being put out of work, and a federal eviction moratorium expiring late last month.

Outspoken comedian and political commentator Jimmy Dore has slammed the US government and politicians in Washington over their alleged inaction amid the eviction crisis facing tens of millions of Americans, suggesting that it demonstrates the catastrophic condition that the country has been put in by both Democrats and Republicans.

“We’re just going to kick people out into the streets in America. That’s their plan. That’s Nancy Pelosi’s plan. That’s Donald Trump’s plan. That’s Joe Biden’s plan,” Dore said in a video on his YouTube channel, commenting on a story about New Orleans authorities’ preparations for a surge of 300,000 or more evictions in the coming weeks.

Last month, the COVID-19 Eviction Defence Project advocacy group calculated that between 19 million and 23 million families across the United States would be at risk of losing the roof over their heads due to the economic crisis which has come in the wake of the coronavirus lockdowns, with expanded federal unemployment benefits expected to run out by September, and a federal eviction moratorium expiring on July 24.

On Friday, economists told CNBC that the eviction crisis at could spark a wave of landlords defaulting on their mortgages, and a domino effect causing a housing market crisis and broader economic collapse unless the government intervenes to stop it.

Through a combination of borrowing and loan guarantees for banks, the US government has already committed over $6 trillion to deal with the impact of the coronavirus crisis, pushing the US national debt past the $26 trillion mark (or 125 percent of GDP), in June. Republican Senate lawmakers recently introduced another $1 trillion economic recovery plan, including a $1,200 cash payment to Americans, and loans for small businesses, but also a 2/3 cut in federal unemployment benefits from $600 a week to $200 a week. Democrats proposed an expanded $3 trillion relief bill in May, but that plan was blocked by Republicans after being derided as a “socialist manifesto.”

Dore’s ‘failed state’ remarks hit a nerve with viewers, who expressed broad agreement with the comedian in the comments section of his video.

“We were born into a pyramid scheme and the bottom tier is crumbling,” one viewer lamented. “America: land of the free, home of the homeless,” another wrote.

“Did not happen here in Italy. No one got thrown out of their home. America needs to wake up. Thanks to Jimmy, someone is speaking out,” a third chimed in. “Strange sounds of silence from corporate capitalist media on this issue,” another user complained.

The debate spilled over onto Dore’s Twitter page, where users debated whether progressives should boycott both parties, begrudgingly vote Democrat, Green or simply boycott the election altogether.

Direct action like this is the only thing that will save this country from its evil Oligarchs who won’t give you healthcare during a pandemic, but will close your business & kick you into the street when you can’t pay mortgage. Voting blue will not help this. https://t.co/m8sVSGdYXK