TOKYO — Mitsubishi Heavy Industries said on Thursday it was freezing its SpaceJet passenger jet program, slashing the annual budget to just one-tenth of current levels over the next three years and foregoing a plan to obtain regulatory approval in a dramatic scale-back of the project it hoped just a year ago would become a key revenue pillar.

Mitsubishi Heavy, a leading industrial conglomerate and Japan’s top defense contractor, in May announced a budget cut for the program — Japan’s first for a passenger jet — by half to 60 billion yen ($575 million). In a new three-year business plan for fiscal 2021-2023, announced on Friday, the company plans to reduce it to less than 7 billion yen per year.

The company also announced other restructuring measures, including reassigning 3,000 workers at its aviation, shipbuilding and coal-power divisions in Japan. The company says that they will not be laid off, but will be transferred within the group or outside it.

Mitsubishi also said that it is in talks to sell its flagship shipyard in Nagasaki to Oshima Shipbuilding, the nation’s third largest, and to combine its warship business with Mitsui E&S.

It added that its coal power-related business will focus on maintenance services instead of building new plants.

The sweeping restructuring measures came after the company reported its first pretax loss in 20 years in the last fiscal year ended in March and expects an 8% drop in revenue in the current fiscal year. It aims to eke out a pretax profit of 30 billion yen.

The main customers of its aviation business — Boeing, ANA and Japan Airlines — have also suffered huge losses amid the pandemic.

“I offer my deep apologies to stake-holders and people who have supported this program for having to decide to freeze it,” Seiji Izumisawa, Mitsubishi Heavy president and CEO, said at a news conference, confirming reports last week that the program would be put on hold.

Investors are hailing the company’s move to cut costs at a time when recovery from the pandemic is expected to be slow.

“What could drive renewed interest in heavies over the next 12 months? It’s very unlikely to be external demand. It’s very unlikely to be a V-shaped recovery in aerospace,” Edward Bourlet, equity analyst at CLSA, said ahead of Friday’s announcement. “What is more likely is self-help initiatives. Any restructuring announcements would be taken so well. This is a perfect opportunity for them to do it.” Among other restructuring steps, Mitsubishi Heavy will complete the sale of its main shipyard in Nagasaki to a Japanese competitor.(Photo by Masayuki Terazawa)

The coronavirus pandemic has hit the sector just as Japanese heavy machinery manufacturers had shifted to aviation as a new source of revenue amid competition from shipbuilders in South Korea and China.

It’s not just Mitsubishi Heavy that is rushing to find alternative sources of revenue. IHI, a leading engine maker that depended on aviation for 70% of revenue, is now working to revise its medium-term business plan. Kawasaki Heavy, which manufactures fuselage for the Boeing 787, has warned of its first annual net loss in 10 years.

Mitsubishi Heavy is looking to the energy business to pick up the slack left by aviation, especially as the new Japanese government of Prime Minister Yoshihide Suga has unveiled a plan to achieve net zero carbon emissions by 2050.

The company said it will strengthen its partnership with Danish wind mill maker Vestas to jointly expand offshore wind power business in Japan and Asia. It also intends to accelerate the development of hydrogen power generation and nuclear energy.

But analysts warn that competition will intensify as rivals such as GE and Siemens are also expected to focus on the energy sector to make up for the loss of aviation business. They warn they could create an overcapacity temporarily, resulting in pricing pressure. 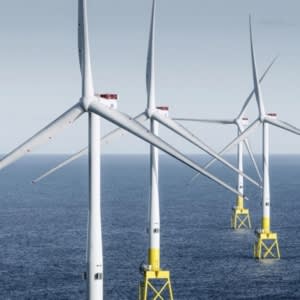 “It’s not a near- and medium-term driver,” Bourlet said. “In the long-term, it’s a good story.”

Japanese heavy industry companies have faced intensifying global competition. Their shipbuilding businesses have been losing ground to South Korean and Chinese competitors as they increase their scale through mergers.

But the Japanese industrial conglomerates are trying to fend off the challenge with their own consolidations. While Mitsubishi Heavy is trying to rationalize its shipbuilding business, IHI has already combined its shipbuilding unit with that of steelmaker JFE to create Japan Marine United, the nation’s second-largest shipbuilder.

In the energy field, Mitsubishi Heavy combined its thermal power business with Hitachi’s to compete against GE and Siemens in the global gas turbine market.

In aviation, it acquired Bombardier’s regional jet program to weave it into the SpaceJet program to challenge Brazil’s Embraer.

Investors have shied away from the companies, however, seeing their businesses as too complex to understand and lacking focus. They also think that their restructuring steps are not as aggressive as those of their Western peers.

In one example of aggressive cost-cutting, GE said in March that it will cut 13,000 jobs, or 25% of the workforce at its global aviation unit.

Investors are now hoping that the coronavirus shock would be big enough a catalyst for the Japanese heavy industry companies to get more aggressive about restructuring.

When news broke last week that Mitsubishi Heavy would freeze the SpaceJet program, its share price jumped 5%. The initiative has cost Mitsubishi Heavy at least 735 billion yen ($7 billion) since its launch in 2008 but has yet to receive regulatory approval from Japanese, U.S. and European aviation authorities as the aircraft’s delivery has been delayed six times.

Mitsubishi Heavy — a key component supplier to Boeing manufacturing the wings of the 787 Dreamliner and the fuselage of the larger 777 — hoped aviation would become a growth engine. Instead, the business has turned out to be a major drag on earnings this year.

The Japanese government, which has partly funded the program, is hopeful it will eventually take off and create an aviation industry in the country.

But investors are now demanding greater cost discipline on the part of Mitsubishi Heavy.

Bourlet says he is not against the idea of SpaceJet, especially in the long term, but most investors have a different view, preferring it to be completely eliminated rather than to be temporarily halted.

Still, a freeze shows that Mitsubishi Heavy is “now finally escaping the grasp of government influence over the jet project,” he said.