Johnson whips up fear of the leftwing mob, but the true threat is from the right | Owen Jones

Mohamed Salah hints he is happy to stay at Liverpool

Japan suicide rates shoot up during second wave of pandemic

Man allegedly hid 3 months at Chicago airport due to virus

Regnery Publishing picks up Senator Hawley’s book after it was dropped by Simon & Schuster.

by news100
in Entertainment
0


A man beloved by almost everyone in today’s bitterly divided America will front the celebration of the nation’s next President and history making Vice President.

Tom Hanks will host the primetime Celebrating America special that will culminate the inauguration of Joe Biden and Kamala Harris on January 20.

Along with appearances from the 46th POTUS and 49th VPOTUS, the Ricky Kirshner produced 90-minute show will also feature performances from Justin Timberlake, Demi Lovato, Ant Clemons, and longtime Democrats’ supporter Jon Bon Jovi. More acts and big names are expected to be announced in the next few days.

As has been rumored for the last week, Celebrating America will air on multiple networks next week.

Starting at 8:30 PN ET, the unity aiming special will be carried by ABC, NBC, CBS, MSNBC, and CNN, I hear. Additionally, the show will be seen on Amazon Prime Video, Microsoft Bing, NewsNOW from Fox, and AT&T DIRECTV and U-verse as well as the Presidential Inaugural Committee’ social media feeds. 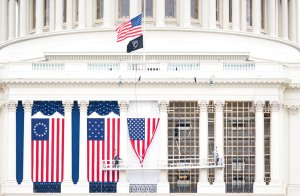 Working with Covid-19 safety protocols and concerns about new threats from the forces that besieged and invaded Congress on January 6, Biden and Harris’ swearing in at noon on the 20th is still scheduled to occur on the Capitol steps. However, with the DC Mayor and others encouraging Americans not to travel to an increasingly heavily guarded Washington, the inauguration will be virtual for the most part – much like last summer’s Democratic National Convention successfully was.

“This inauguration presents a unique opportunity to spotlight the resilience and spirit of an America United,” said PIC CEO Tony Allen in a statement today. “We have witnessed countless heroes this past year step up to the frontlines and serve their fellow Americans, so we are telling their stories, spreading their collective light, and celebrating the best of our country and its people with this prime-time program,” the Delaware State University president added.

“Our first priority is safety — so while many of us will be watching safely from our homes, we are creating real moments of connection that highlight a new inclusive American era of leadership that works for and represents all Americans,” Allen concluded.

Crowd pleasers all, Timberlake, Lovato, Clemons and the New Jersey rocker have all played their fair share of political events over the years. A participant in the We Are One event that commemorated Barack Obama’s accession to the White House in January 2009, two-time Oscar winner and Presidential Medal of Freedom winner Hanks was a vocal Biden backer in last year’s election. Appearing at virtual fundraisers with the ex-Veep during the campaign against Donald Trump, the Toy Story and Greyhound star put his own money on the table with contributions to Biden too.

In a lead-up to next Wednesday’s ceremony, the Biden team are bringing in some fictional DC heavyweights for a January 15 fundraiser. Unveiled today, the “Conversations with Actors from The West Wing, Scandal, and Designated Survivor” entitled event with see Designated Survivor regular and ex-Obama staffer Kal Penn playing ringmaster. Scandal‘s President Mellie Grant herself Bellamy Young will be joined in the virtual shindig by Bartlet administration vets Richard Schiff, Bradley Whitford, Dulé Hill, and Janel Moloney.

With a theme of “America United,” Biden and Harris’ inauguration also has events planned for MLK Day on January 18 and a nationwide Covid-19 Memorial to Lives Lost on January 19’ Already announced, Biden and Harris will participate in a wreath laying on Arlington National Cemetery on January 20, with former Presidents Obama, George W. Bush and Bill Clinton and the former First Ladies in attendance.

In case, you have concerns about more MAGA morons violently disrupting the ceremony on the 20th, the National Guard and other forces will be out in full force, authorities promise.

Johnson whips up fear of the leftwing mob, but the true threat is from the right | Owen Jones

Mohamed Salah hints he is happy to stay at Liverpool

Japan suicide rates shoot up during second wave of pandemic